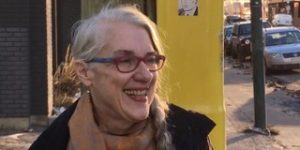 Even in 2015, when I was having seizures once a week, I reported at the Emergency Room with severe neurological symptoms (extreme trembling, intermittent vision loss, inability to walk or talk). After 12 hours, the neurologist I had insisted on seeing told me, “I’ve just looked at your recent CT and EEG, and they show nothing”.  I was summarily dismissed from Emergency.

The symptoms were later identified as penicillin poisoning due to black mould in my apartment.

“If I can’t see it, it’s not there” — A common response of both medical minds and civilians. A neurologist, ca.1985, told me, “Epilepsy is an invisible disability”. It was mostly invisible then, but times are a-changin’.

EEG @ Foothills, ca.1990 — showed two possible originating sites for my seizures, either left or right temporal.
MRI @ Foothills, ca.1999, confirmed right temporal damage, narrowing down significantly an appropriate way to operate, but my neurologist told me, “The only way we’ll know for sure is if we record a seizure while you’re having it”.
This was a pipe dream at the time, but ca.2000 a Seizure Monitoring Unit, four beds around a comprehensive nursing station with the latest computer and electronic supports to observe and record any seizures 24 hours a day, was established at the Foothills Neurology Clinic in Calgary.

SMU @ Foothills, ca.2006: The Seizure Monitoring Unit recorded my seizures on both video and EEG monitors, and pinpointed neural activity before, during and after seizures. It did not indicate any triggers for the seizures, never known to me or my doctors.

In 2008, pursuant to a study led by Dr. Samuel Wiebe at the Foothills Neurology Clinic in Calgary of Deep Brain Stimulation and its potential use to control seizures, electrodes were implanted near the originating site ofmy seizures. The “neuro-pacemaker” procedure did not work for me, though it has for many.

In 2017, during a consult with a neurologist I had met before the implant surgery, he told me, “You are still a good candidate for surgery, notwithstanding your age”. We had been considering temporal lobe surgery in 2006 before I chose to try the DBS route, and he was confident temporal surgery was still a good choice to end or control my seizures.
I thought it over again, and decided, “Let’s do it.”

In June of 2018, Dr. Walter Hader performed a Right Temporal Resection at the Foothills Medical Centre in Calgary. Surgery took 6 hours, I recovered quickly, and I haven’t had a seizure since. It took a while (54 years), but Medical Science did it.

I’ve watched the evolution of neurological testing from the beginnings of EEG’s, MRI’s and CT Scans. Medical Science has learned how to measure the brain and its activities with extraordinary detail and accuracy.

Now we need to identify which parts of the brain do what, and how to correct a problem in the brain without affecting other functions as well. It is being understood better and better, and I have had the benefit of observing and participating in some of the exciting, ongoing world-wide research which must surely lead to the ability to treat and control all seizures.

Medical Science will do it.
It takes a village, and a whole lot of time and money.