I grew up seeing my parents struggle to make ends meet and told myself I had to study hard. I was an above average student and good at sport, representing my school in competitions.

In June 1989, during training, I had a fall that resulted in a brain injury. It took a year before I was diagnosed with complex partial epilepsy. I had to stop running competitively because tiredness would bring on seizures. Hospital became second home. I became depressed but with the encouragement of family and close friends I learned to accept my illness.

Friends were afraid whenever I have a seizure. They did not know how to manage and slowly my circle of friends dwindled. To help myself, I began to read up about epilepsy and how others could help me when I had a seizure slowly I started running leisurely and playing badminton with my friends occasionally. 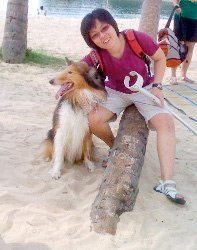 Finding employment was a concern but I started as a programmer and slowly moved up the ranks. But stress and long hours increased the frequency of my attacks. I resigned and found a job as an IT project manager. Work remains stressful and I have occasional seizures but understanding supervisors and colleagues look out for me. My memory deteriorated after years of having epilepsy so I always write down tasks assigned to me. To compensate for the times that I am unwell, I work doubly hard when I am well.

I also have hypertension and multiple failed knee surgeries means I need to use a stick or wheelchair. Chronic pain has become part of my life. I am a member of Epilepsy Care Group Singapore, who supported me during my darkest moments. You can either choose to look beyond your circumstances and rejoice, or allow yourself to be overwhelmed with self-pity. I have chosen the former.