Hermes is 29 years old and lives in Blantyre, Malawi. He is the sixth born of a seven-children family. He has a wife, Ruth, and a young son.

He suffers from convulsions and also has absence seizures. He has never seen a neurologist: his medical assessment and medication were provided by a nurse.

“Due to my epilepsy I have been a victim of discrimination and inhuman and degrading treatment, to the extent that I was denied opportunities such as socializing with friends and participating in developmental activities”,

says Hermes. He belongs to a chiefdom and could have inherited the throne from his uncle, who was a chief, when he died 8 years ago. However, the elders have put a caretaker chief in place while they consider the situation. In their opinion putting a person with epilepsy on the throne would be against their ancestors will and would invite the wrath of the community. 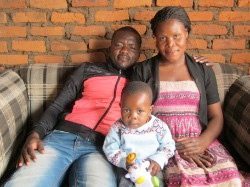 Hermes has had employment problems, despite obtaining a diploma in Rural Community Development. No company or individual has been willing to offer him a job, despite many efforts. However, finally, he became involved with the FEDOMA Epilepsy project, which he joined as a volunteer and started seeing a brighter future on the horizon. Hermes tells that, during his school years he has faced a lot of problems. He missed many days of school because of his disability, and there was no specialist teacher to help him.
Herman likes to play soccer, listens to music and composes songs. He also likes poetry and writes poems. He keeps himself informed on current affairs by watching TV, listening to the radio and reading newspapers.